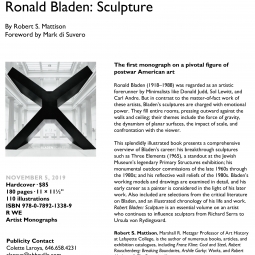 The first monograph on a pivotal figure of postwar American art

Ronald Bladen (1918-1988) was regarded as an artistic forerunner by Minimalists like Donald Judd, Sol Lewitt, and Carl Andre. But in contrast to the matter-of-fact work of these artists, Bladen's sculptures are charged with emotional power. They fill entire rooms, pressing outward against the walls and ceiling; their themes include the force of gravity, the dynamism of planar surfaces, the impact of scale, and confrontation with the viewer.

This splendidly illustrated book presents a comprehensive overview of Bladen's career; his breakthrough sculptures such as Three elements (1965), a standout at the Jewish Museum's legendary Primary Structures exhibition; his monumental outdoor commissions of the late 1960s through the 1980s; and his reflective wall reliefs of the 1980s. Bladen's working models and drawings are examined in detail, and his early career as a painter is considered in the light of his later work. Also included are selections from the critical literature on Bladen, and an illustrated chronology of his life and work. Ronald Bladen: Sculpture is an essential volume on an artist who continues to influence sculptors from Richard Serra to Ursula von Rydingvard.

Mark di Suvero is one of America's most celebrated living sculptors. 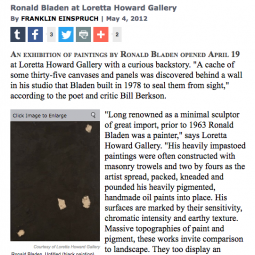 An exhibition of paintings by Ronald Bladen opened April 19 at Loretta Howard Gallery with a curious backstory. "A cache of some thirty-five canvases and panels was discovered behind a wall in his studio that Bladen built in 1978 to seal them from sight," according to the poet and critic Bill Berkson.

"Long renowned as a minimal sculptor of great import, prior to 1963 Ronald Bladen was a painter," says Loretta Howard Gallery. "His heavily impastoed paintings were often constructed with masonry trowels and two by fours as the artist spread, packed, kneaded and pounded his heavily pigmented, handmade oil paints into place. His surfaces are marked by their sensitivity, chromatic intensity and earthy texture. Massive topographies of paint and pigment, these works invite comparison to landscape. They too display an aesthetic concern born throughout the artist’s entire oeuvre. These works radiate with the subject and power of nature. Bladen’s paintings are a conduit into his complex sculptural search. Bladen’s painting reliefs welcomes the viewer to step into the artist’s next body of legendary work." 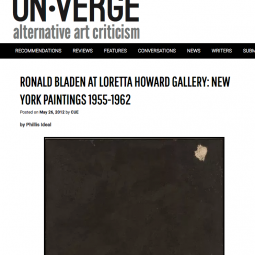 Ronald Bladen was making abstract painting and an important voice in the New York School before creating his well-know minimal sculpture. Though the sculptures are precise and measured and the paintings, organic and process oriented, the two bodies of work have in common that the images linger in one’s mind like a mirage in the desert. These packed, troweled, impastoed paintings of rich sandy colors are transformative; they initiate an experience in the viewer.  When looking at Space Landscape, c.1956-59, I feel I am standing on earthy pigments in a timeless landscape, then soaring over it and looking down at shades and shapes of a distant topography of rivulets, scrubs and rocks.  In his series of paintings White, Blue, Green and Red, c.1960-61, the world becomes a rough frontal map zeroing in on a few islands or trails showing me the way to someplace in myself that has always been there.

Bladen never loses sight of this basic intuition that reflects the history of the exploration in art.  This is sophisticated work that transcends formal concerns. It has the connectedness of a child making a sand castle, intuitively knowing how large to make the rooms, then deciding to change the scale, flattening the wall and adding sand of a different shade so that all is left of the boundaries is a shift in color.   He repeatedly simplifies the shape but keeps the emotional complexity that gives the viewer a point of entrance into the spirit of the work.

Bladen’s approach to painting is honest, direct, deliberate and convincing.  It is total commitment. These abstract paintings share ground with early man as well as looking relevant today.